The Crazy New Age Cult of “I AM”

The Crazy New Age Cult of “I AM” 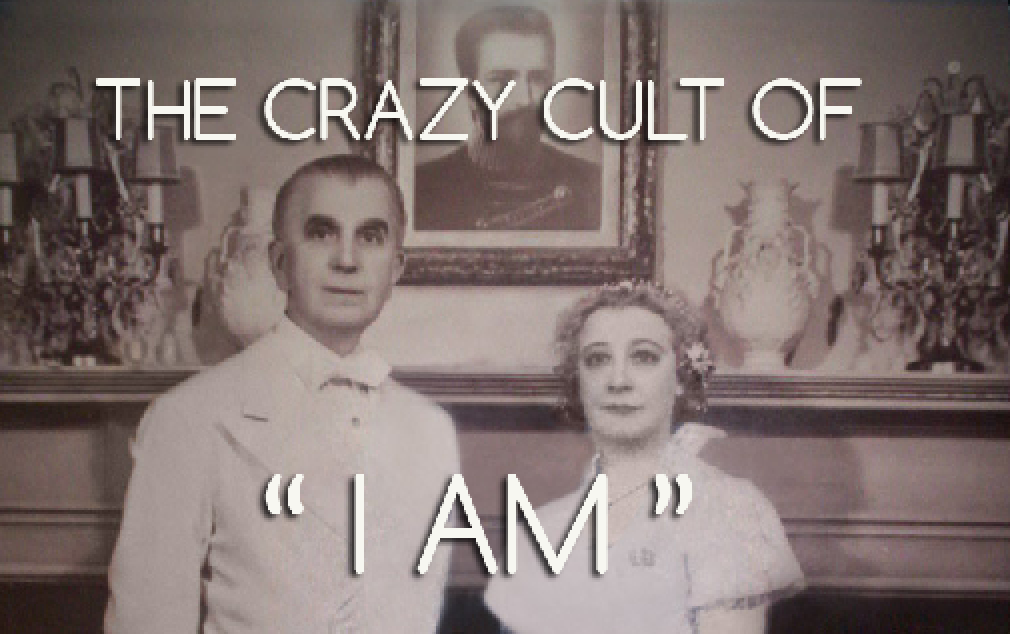 One of the ways to know the vocal code signaling of the Luciferian cult that sprung out of the Blavasky Theosophists that shadow handle the new age movement, is the term 'I AM'   -Notice the all capital spelling instead of saying an individual 'I am.'

The Luciferian half-truth occult doctrine of 'I AM' was not truly ancient, and relies on a delusional foundation of unseen ascended masters or cosmic beings (ET Demons) that are shaping the destiny of mankind from behind an occult order.

This is also the abberated foundation of the masonic Martinist synarchy with their occult order of 9 beings that they worship to rule over humanity in perpetuity as us as their communist cyber slaves.
Make no mistake my fellow friends, these people are possessed by evil and I should know, because these types circled me for years from the new age movement stealing my words and creative works.
The crazy cult of I AM,  runs on a foundation of fraud, identity theft and plagiarism.
Many I AM initiates are connected to new age frequency cults surrounding the [ancient solfeggio frequency] conspiracy story, or scams involved with the fraudulent new age opposition 432 movement that started in Holland around a devotee of the new age father Sir George Trevelyan.
-Both sides of that controlled new age opposition 528Hz & 432Hz movements wanted a musical revolution against true musical history and standard music entertainment tuning.
Since 2006 I was subjected to severe psychic attack and gang stalking from many of these types including their leaders.
That stopped when I repented my sins and accepted Jesus Christ as my Lord and Savior.
True salvation is an ongoing process, not just a dip in a lake or attending a man made light show in a circus church. If you are lost, you can be found, however the Godless pray upon the lost and confused as energy vampires such as the types I previously mentioned.

Wherever you see a lost man or woman using the Luciferian, 'I AM' doctrine (usually females are groomed)  you will find that they become host to a legion of Godless demons walking the earth penetrating alternative truth movements and perpetrating alternative woo healing scams such as fraudulent quantum healing claims.  (most are demonic projections)

Many women in the new age also fall victim to delusional predators who feed on their bio-energy fields via the scam of quantum energy healing.
As I have pointed out on my telegram channel, true quantum entanglement is random and no organized healing information from any man made machine can be sent faster than light.
This is a fact and yet many of those scammers continue to con the public under absurd of "spooky action at a distance" false healing claims.
Many false new age healers don't understand the placebo affect and actually believe they have god like powers to heal the many over great distances.
Many use the unprovable healing claim of scalar energy or spooky action because they have fallen for prior delusional mind control of new age pantheistic ideology and try to sound smarter than they are.
You can learn the real facts of quantum entanglement  CLICK HERE TO VERITASIUM

Many women are indoctrinated into delusional Cults of Isis like the sisterhood of the rose and other such Godless satanic ritual abuses that prey upon the hearts of the lost and confused.

Know them by their fruits as they virtue signal with masonic, Egyptian Rosicrucian symbolism or demonic conjuring via Kabbalistic speaking in tongues that they call light language. Many are surrounded by ' astral guides' that they channel... (demonic possession)

I have reported before on my telegram channel on several key pantheistic mind control techniques these programmer devils in the half-light employ:

1. The I AM programmer will take control of the target victims mind via pantheistic thinking of solipsism -that you are a god, goddess or a high priestess. They indoctrinate that we are all one mind with all things, and we are all one in unity hive mind consciousness. -This furthers the one world, new earth order agenda.

2. The I AM programmer will tell you were an important historical figure, or reincarnated ascended master in a past life and the programmer will tell you who you are and what your life purpose is. If you openly question their narrative, they employ many qualities related to the gaslighting and grooming strategies of spiritual narcissism to berate or put you down lower than them.

3. The I AM programmer will tell you that you must open your heart to accept what they say is true and that your own mind cannot be trusted.  When you question their programming or reject their narratives, they proclaim you are not in your heart. They attack your self worth when exposed.
(RED FLAG mind control programming)
-The antithesis of Jeremiah 17:9 -The heart is deceitful above all things, and desperately wicked...

4. The I AM programmer will tell you that Christ is an ascended master of the ascended master collective and that you are collective Christ consciousness, therefore you are a god or goddess and the actual Jesus Christ did not exist.
They denigrate Christ as a mere rubbing oil of kingly anointment under the new age neo-gnostic ideology. This is present in the syncretic deception of new age blending of opposing ideologies.
If you mention the name of Jesus Christ as Lord and Savior, the Godless will fly into an enraged state of self-entitled self righteousness or vomit forth foul language of vile profanity.  -This is actually the demonic attachments within the Godless programmer fleeing in the name of Jesus Christ.

5. The I AM programmer will tell you that you have a special secret mission on earth to open your heart and spread your light and that at an appointed time you will be told to focus on a specific man made time or date of collective consciousness focus. - the use of demonic spirit linear numbers like 111, 222, 444, 888 or soul harvest mind control techniques via the new age ball-of-light mediation etc...

6. The I AM programmer will tell you that your life is forfeit for your mission in the great plan of revolution, or great work of White Brotherhood to help humanity ascend to the next level of consciousness by joining in unity. -This ties in with the anti-Christ agenda of losing oneself to the mark of the beast via collective hive mind trans-humanism. -The ultimate plan of globalists to own everything and you will own nothing under a perpetual slavery of technocratic socialism and collapsed nation states.

7. The I AM programmer will tell you that there are cosmic beings ruling over humanity and only the high priest or priestess can have access to these beings. This plays exactly into the synarchy agenda of occult rule of unelected elite who are above the rule of law and Godly morality.

8. The I AM programmer will tell you that systems like sovereign nation states are evil and must be eliminated for one world new earth order. -that each of us is sovereign, with no need of social order or ownership of private individual intellectual property or land or private property rights. -This follows the UN one world order agenda that was infiltrated by the very cults I mention.
Many handlers in alternative movements are connected to new age synarchy with connections to United Nations programs under the false banner of world peace.

9. The I AM programmer will tell you that the concept of God and Jesus Christ are outdated pagan religious terms that should be abolished for the true god is the universe, source, the divine feminine, or Gaia. -the distortion of ancient culture into neo-pagan modern wiccan witchcraft beliefs. It is a sin to worship the created instead of the true father creator.

10. The I AM programmer will tell you that you are to give up worldly property and individual creativity for a bright light future under the Luciferian banner occult symbol of infinite unity ∞    -Know this symbol well, for it infiltrates all of the lost world society under the marching orders of inclusiveness.
(the legal definition of inclusion is the exclusion of the other)

11. The I AM programmer will cherry pick passages from scripture and project a false sense of self-righteousness when questioned or exposed for their long tongued lies and deceit.
Often they will leech or plagiarize an intended targets words and identity as a doppelgänger, then project their own evil onto their intended targets.  Many follow the gang stalking Zersetzung strategies of the communist Stasi to targeted opposition that can speak out against their deeds of deceit.  Indeed you can know them by their fruits of evil and deeds of iniquity. I have experienced this first hand upon me by these types

Keep in mind I know all this first hand because they came at me and tried their hardest to indoctrinate me into their Luciferian new age cults.

Resist with all that you can, repent of your sins and call on Jesus Christ and the Father to expel those demons and their soul harvest cult from Gods dominion. Wherever you see the neo-pagan, neo-gnostic new age mind control of I AM, warn others of that mind control Godless programming employed by alternative charlatans and snake oil hucksters of the Luciferian new age ...

This Wiki link explains the modern cult of I AM   CLICK HERE TO LEARN MORE
You will be amazed that the founders of this I AM cult were known fraudsters, charged with many counts of copyright infringement and mail fraud. Today their legacy of fraud spawns a new generation of alternate holistic healing scammers and grifters who claim to have magic healing powers or special quantum machines that heal you.
All for a hefty $$ fee of course, and only inclusive, if you subscribe to their special brand of new thought cult of 'I AM' crazy!

Sooner or later, the lord will cut them down...  Best to let them be, walk away, and watch them fall into the burning lakes of madness & perpetual fire.